The capacity to be aware of, control, and express one’s emotions, and to handle interpersonal relationships judiciously and empathetically. “Emotional intelligence is the key to both personal and professional success” 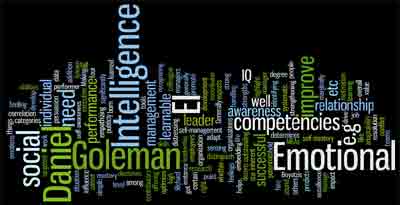 What exactly is Emotional Intelligence (EI)? Most thinkers on the subject note these factors:

Emotional intelligence is a convenient phrase with which to focus attention on human talent. Even though simple as a phrase, it incorporates the complexity of a person’s capability. While the earliest psychologist to expore this area of “social intelligence” (Thorndike in the 20’s and 30’s, cf. Goleman, 1995) offered the idea as a single concept, more recent psychoiogists have appreciated its complexity and described it in terms of multiple capabilities (Bar-On, 1992, 1997: Goleman 1998: Saarni, 1988).

Gardner (1983) conceptulised this arena as constituting intrapersonal and interpersonal intelligence. Salovey and Mayer (1990) first used the expression “emotional intelligence” and described it in terms of four domains: knowing and handling ones own and others’ emotions. Other conceptualisations have used labels such as “practical intelligence” and “successful intelligence” (Sternberg, 1996), which often blend the capabilities described by the other psychologists with cognitive abilities and anchored the concepts around the consequence of the person’s behaviour, notably success or effectiveness.