Become an effective and trusted leader through discovering who you are, appreciating your strengths and empowering others.

A guide to master, through understanding and implementation, a number of critical competencies associated with knowing yourself, competent management, emotional resilience and effective communication.

Buy Now Resources, Links & Videos
Interested in my other book? 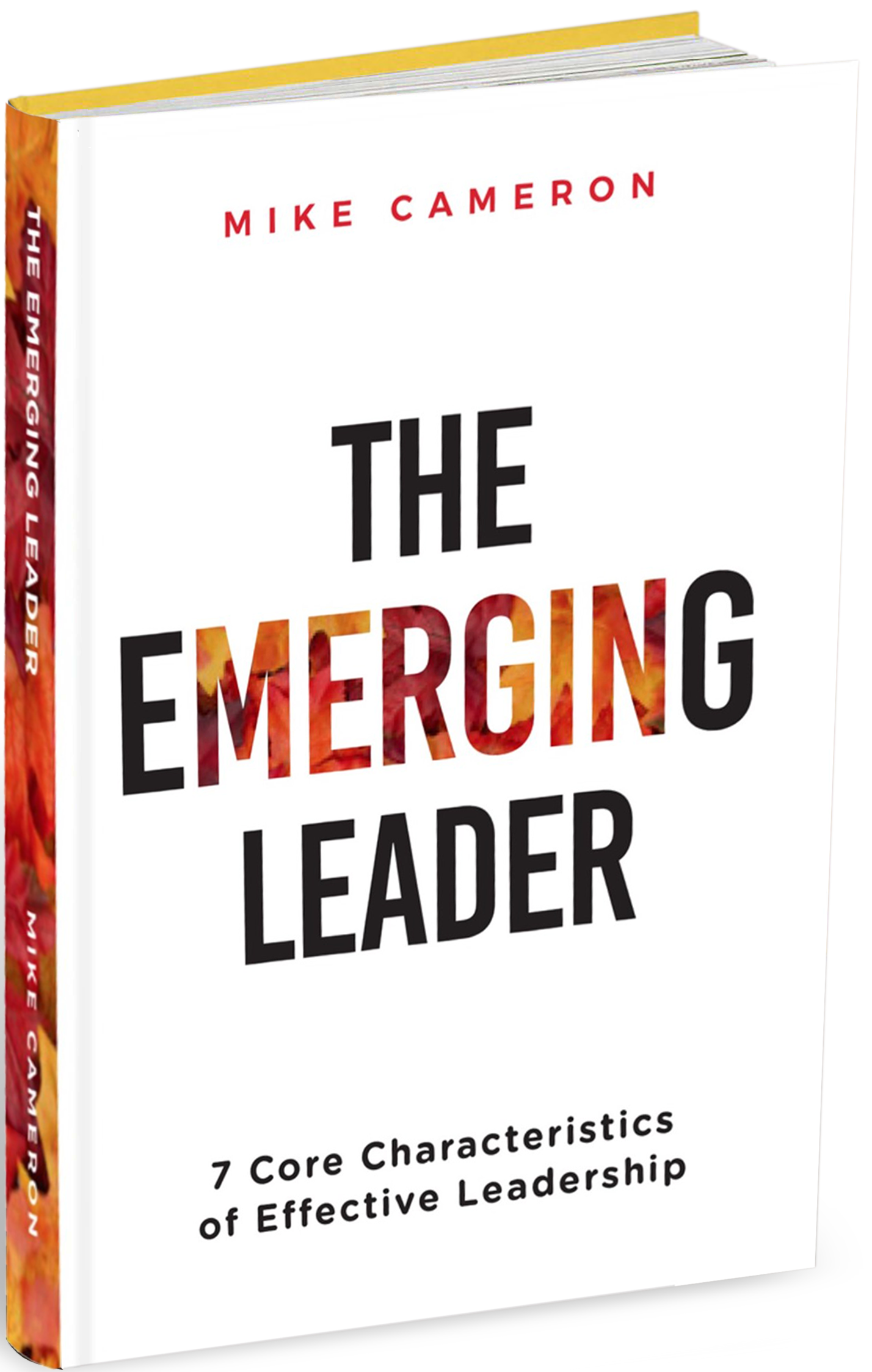 The Emerging Leader is for anyone who wants to hone their skills, acquire new competencies and better understand areas for personal improvement.

It is a practical self-coaching guide on how to master and habitually exhibit the seven core characteristic of effective leadership, through knowing yourself, being emotionally resilient, displaying management intelligence and using efficacious communication. 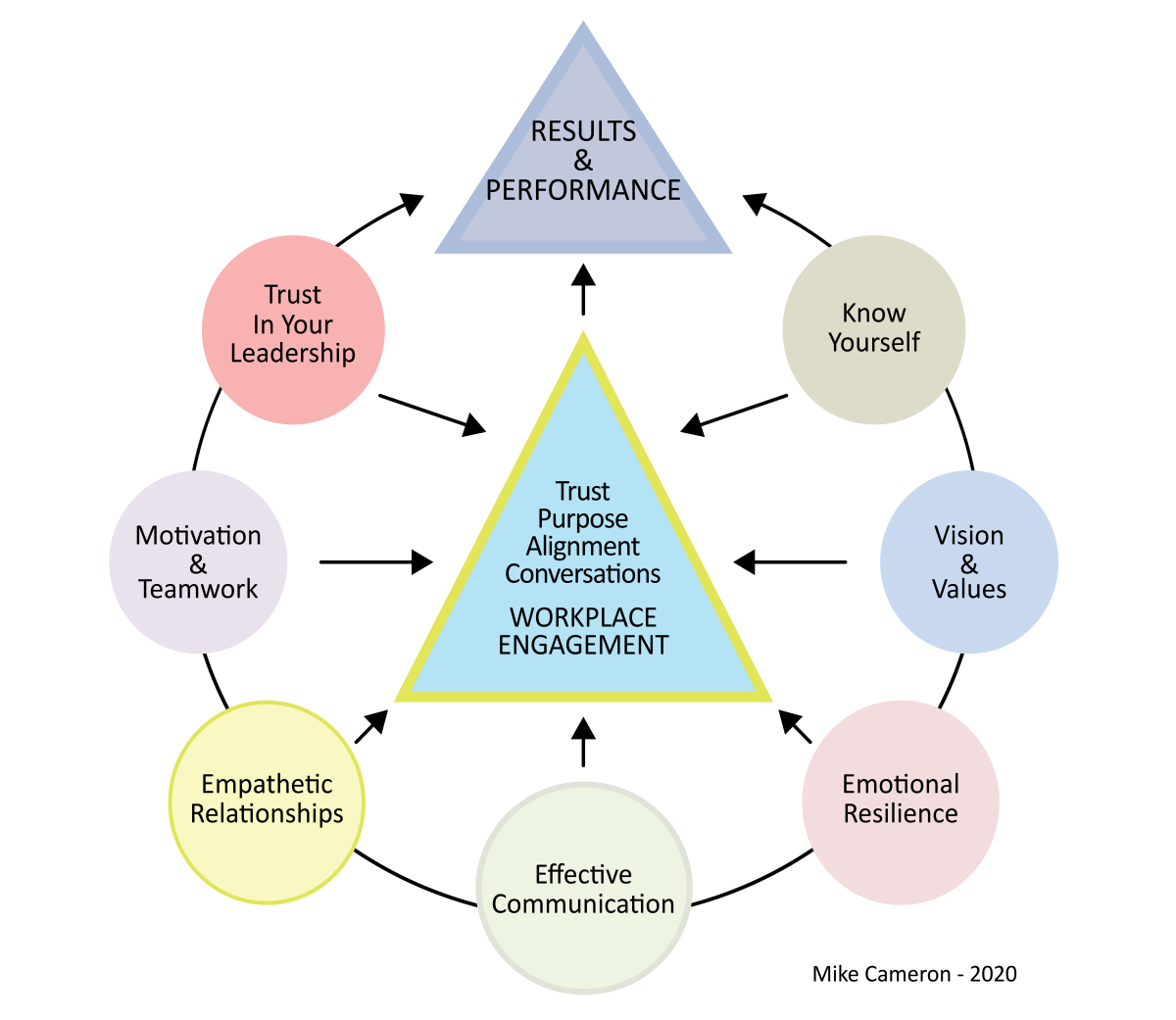 As you progress through the book, Results & Performance, Workplace Engagement, Trust, Purpose, Alignment and Communication, shown in the triangles within the Emerging Leader’s model, will be discussed in detail.

Mike and I have known each other for over 40 years. Our relationship began in 1978 when we worked collaboratively in our respective management roles with Farley and Lewers (a significant player in the quarrying and concrete market, at that time). Whilst our careers diverged, we re-united in the early 1990s after my appointment, by Mike, as a contractor to support the implementation of his entrepreneurial and award-winning concept of ICI Explosives “Rock on Ground” in Australia.

This project clearly demonstrated Mike’s extraordinary capacity to effect change, not only in business processes and procedures, but also in those entrenched behavioural paradigms that often result in such strong resistance to change.

Later, I observed him narrow his focus to the development of people. In the late 1990s, as a director of Quest Serviced Apartments, I engaged Mike as our recruitment consultant and he successfully recruited some 60 key staff for our organisation, which was then entering a stage of rapid expansion.

Although I call Mike a close friend, I have also been witness to his personal development as a change agent for people in executive, business and leadership roles. He has amassed a body of knowledge and experience that has positioned him as one of the leading experts to effect change in the way key businesspeople behave and think.

His coaching qualifications are universally recognised and his programs, although firmly positioned in the business management environment, are focused on improving people rather than improving business processes. They are extensive, comprehensive and life changing. Mike will say he is not a life coach, but I have witnessed the positive impact he has had on people grappling with the many relationship issues that emerge in the workplace. I am certain that their new insights will have a profound effect on their connection with people and give them the satisfaction of understanding how to better achieve mutually positive outcomes. 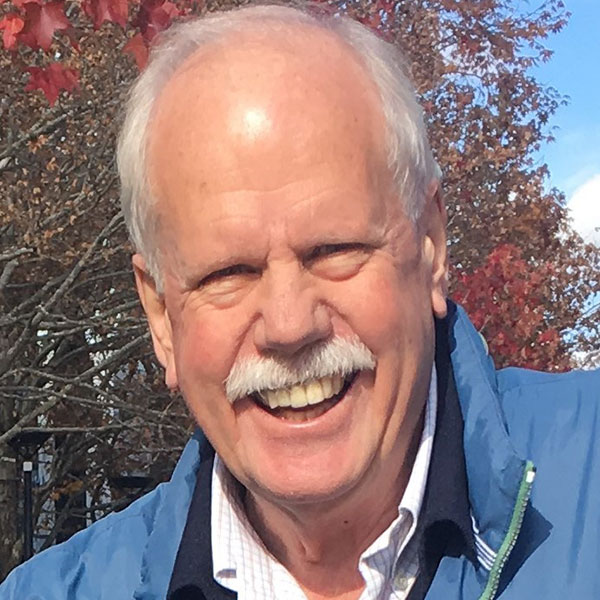 Past Director and Owner

“Management is efficiency in climbing the ladder of success; Leadership determines whether the ladder is leaning against the right wall.”

I hope that you have found or will find, something of specific interest and/or real support within this book, from the contribution of the many worthy authors – with their wealth of information, tips and tools – as you take on a challenging role, with more accountability, and emerge as an inspiring, empowering and newly-defined leader.

When the need arises, please revisit your Reflections pages, at the end of each of the four Guideline chapters where you will have already identified the most important take-aways from within those forty-two key segments.

However, I would also suggest that, from time to time, you ponder on the following: 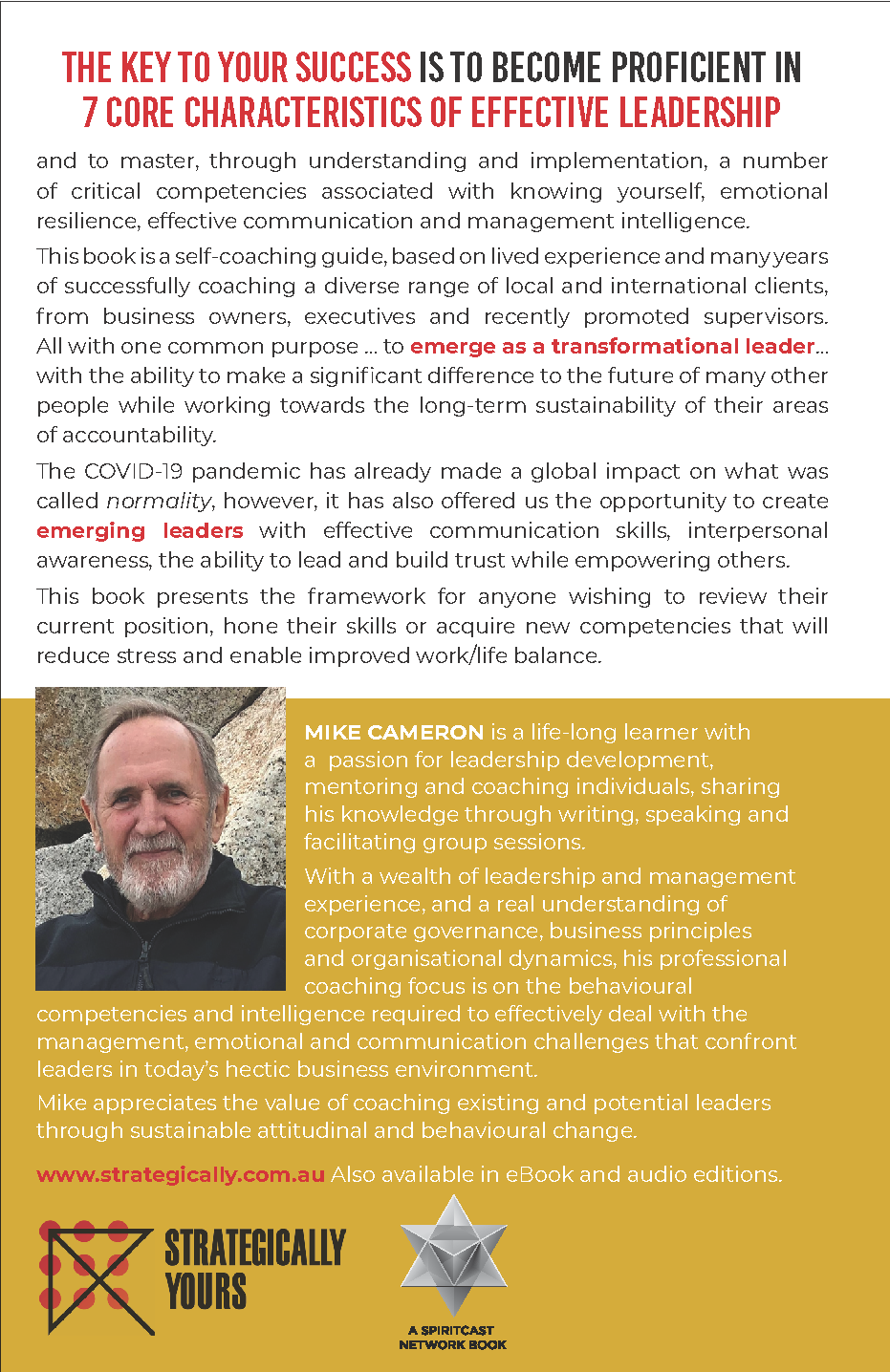 The 7 Core Characteristics of Effective Leadership

“Regardless of WHAT we achieve in our lives, our WHY – our driving purpose, cause or belief – must always be based on the principles of ethics, trust and integrity.” 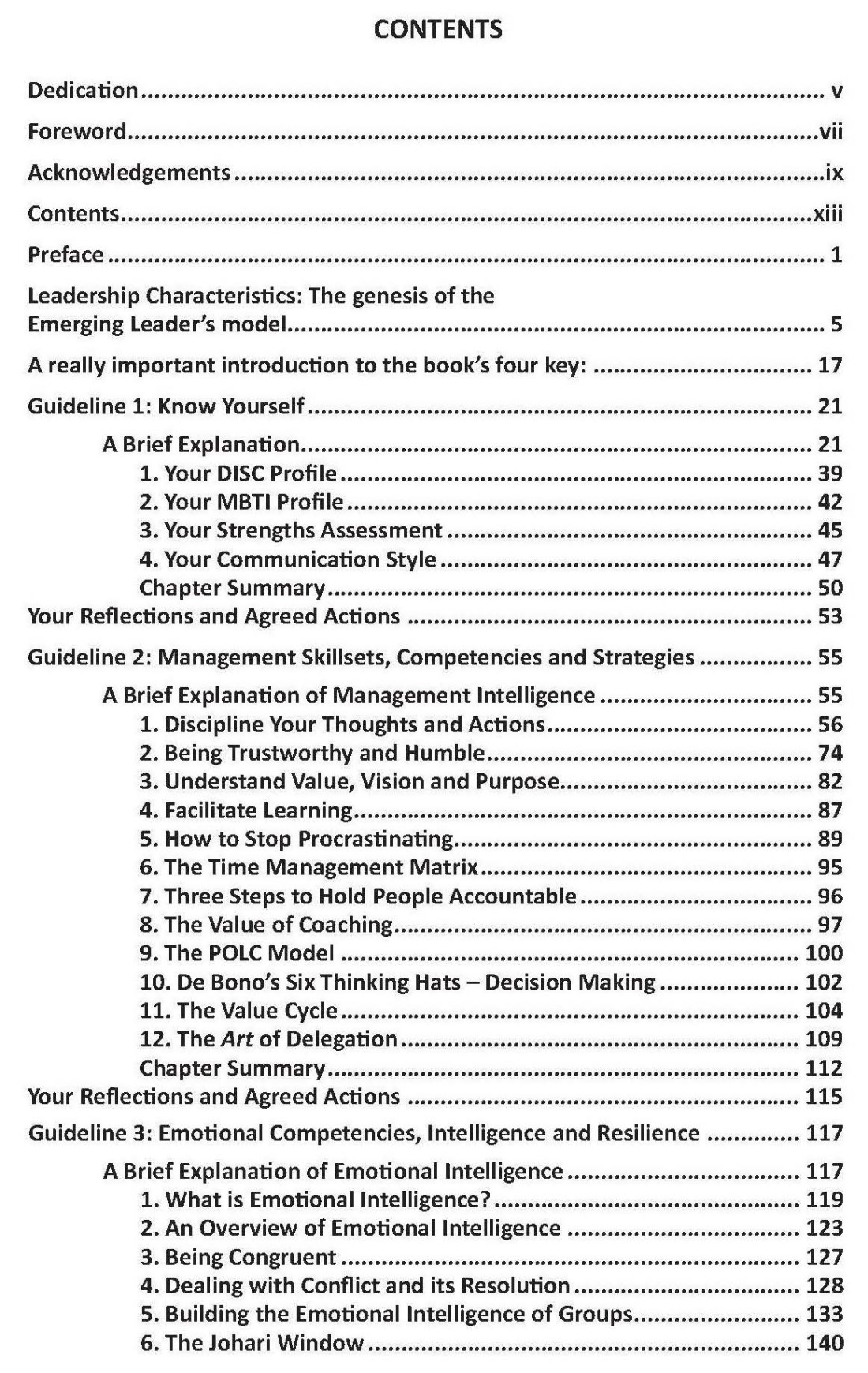 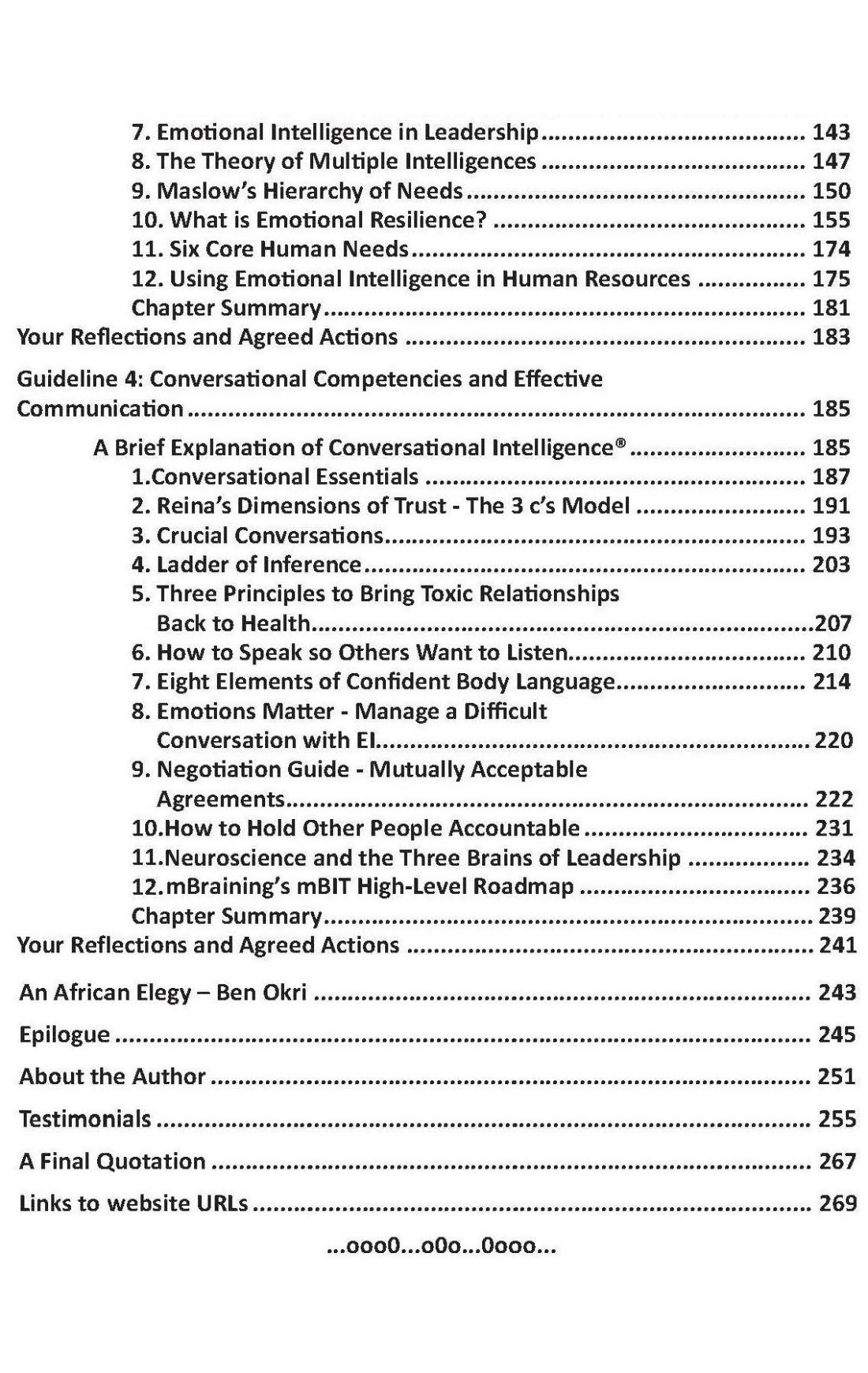